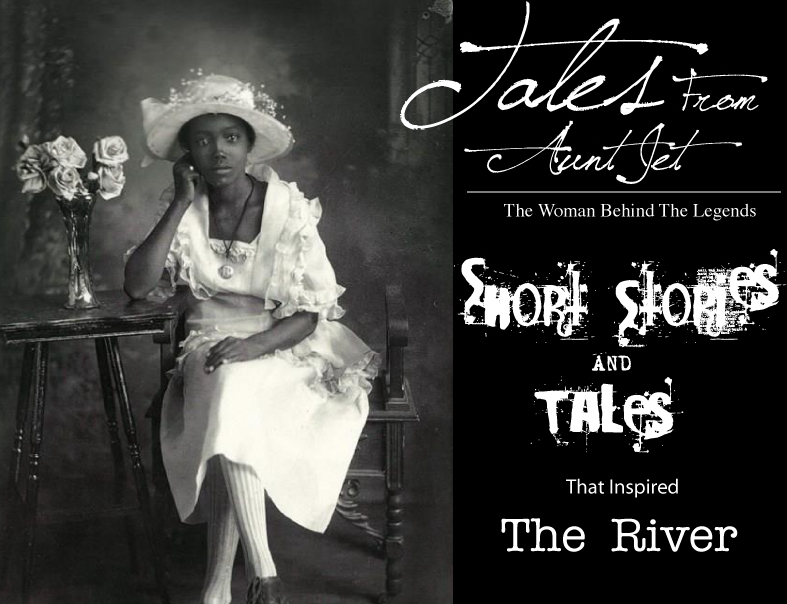 Without my Aunt Jet 'The Blood Brother Chronicles' would not have been written.

It is as simple as that.

With her flair for storytelling, as well as her tasty cakes, cookies and pies, a young kid like myself  would have never heard about the 'Blood Brothers'.
On this page, you will find some of  Aunt Jet's more colorful stories, as well as how that particular  spoken folklore was
related in 'The River'. My Aunt Jet and I talked about everything concerning the 1920's; a time when she was a young girl, growing into a teen. This was a very special time for her, as with any teen coming of age. Aunt Jet said she met 'Skeeter' (Benjamin)  and 'Slick' a number of times and each was memorable. But as time went on, around the late 1930's, she started to see less and less of the legendary Southern outlaws till she lost touch completely.
There have been many theories why the men stopped communications, often sending  Aunt Jet postcards from every city they visited.
My aunt said  the last postcard that was received was sent by 'Skeeter' (1933) . The men were on their way to New York City (probably smuggling Southern moonshine to local bars). The postcard said 'Skeeter' was excited to visit Harlem and he would bring Aunt Jet a gift when he got back to Columbus, Texas.

The men were never heard from again.

Personally I think they were killed by the Italian mafia they often dealt with, then robbed for their booze and cash.
No  one knows - but below are stories my elder related to me about the boys. 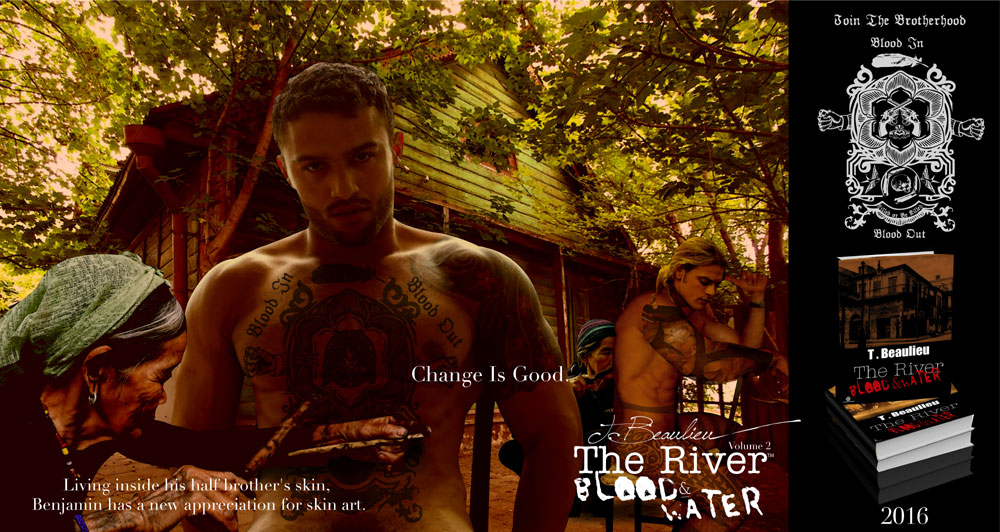 All my readers have had one question, asked to me over and over again.

" Was Benjamin and Slick handsome - how did they actually look?"

My Aunt Jet was often very elaborate on how the boys looked. Back then, living in the Deep South, it was not common for poor white and black people to dress up in 'their Sunday best', as my elder would say.
She said that boys were always dressed to the nines; expensive shoes, three pieced suits and ties, etc.  Aunt Jet related one situation when Benjamin was to fix her mama's wood burning stove. Aunt Jet said he actually stripped down to his boxers and undershirt, all to make sure he did not get any soot on his fine suit.  Slick was none the better, always dressed 'Casket Sharp'

As far as how the men looked, my auntie could only relate the men's looks to screen stars popular in that time. She said Skeeter (Benjamin) looked a lot like silent screen star Valentino, but more 'manlier and brolic'. Auntie said the infamous creole was such a stunner, one time they went into town (which did not happen often as the boys always felt the law was after them) and woman - white and black 'blushed two shades of lust and red' when seeing the tall man.

When asked about Slick's legendary mane, said to be 'yellow like sun rays' my auntie said the lovable thug's hair 'rested on his broad shoulders', always cut nice and neat. It was uncommon for white men to wear their hair long in those days, so this detail stood out.  When asked about the boy's strength, Auntie said Slick was shorter than Skeeter, but he seemed stronger. One time the young man lifted up a whole caste iron oven without much of an effort.

When asked if they were muscular, my great auntie did not have a term for that back in the day, but said that 'them boys were built like brickhouses, strong and brolic'.

My auntie would also relate the most intimate details about the men.
For example, Slick had a huge sweet tooth. When Aunt Jet's mama knew the boys were visiting, she would make the blonde thug his own pie all to himself, which he would eat in one sitting. Ironically enough, his half brother did not like sweets at all.
Auntie was also amazed at how neat the men were and the fact that they could actually cook really well , something that was uncommon for men in that age. Slick was said to have one time made a beef stew that was so good, Aunt Jet's mama kept the recipe, one of which I think is still shared in our family to this day.
Benjamin's specialty was Bar-B-Qing, and he was good at it! 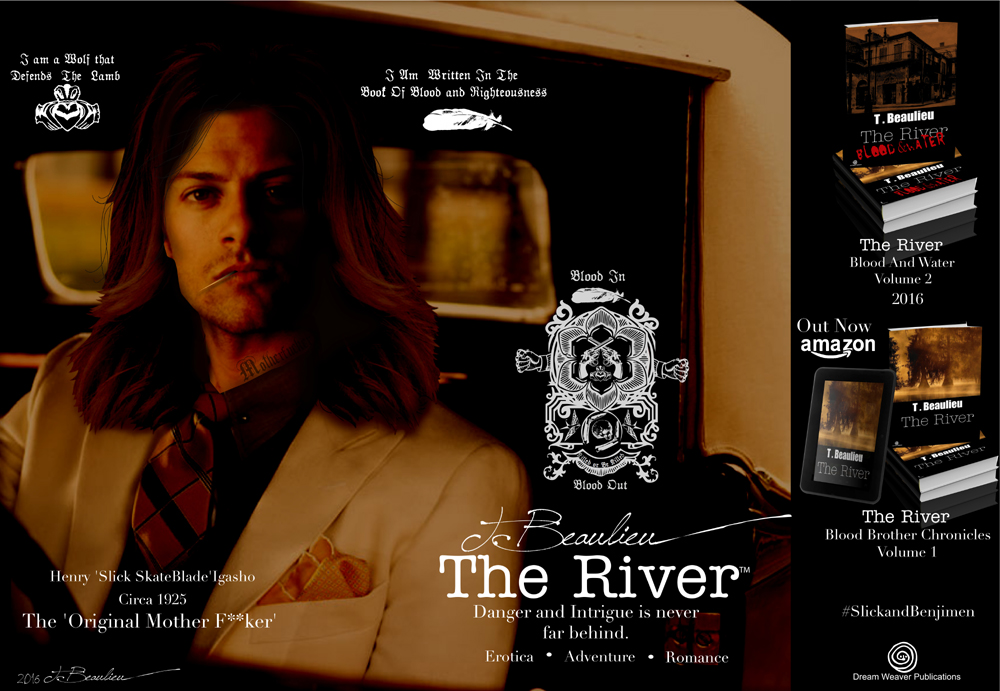 I remember asking this question once when in my teens, just out of curiosity. Aunt Jet did meet the REAL Kelly once, Slick and Benjamin had brought her over, and she was blond, a 'flapper' (Aunt Jet's mama called her a 'hussy') and the young woman did have a black female assistant she got along with very well.  Aunt Jet later said that Slick was probably common law married to the woman since there has been no marriage certificate found, nor any information about Kelly's family.

Unfortunately there is very little information backing up this allegation (probably for good measure) but Aunt Jet suspects  the boys were apart of a vigilante movement that was responsible for 12 Klu-Klux Clan chapter firebombs that happened in Georgia, Alabama, Louisiana, Houston and Dallas. Mainstream history tells nothing of how blacks fought back against rising segregation and racial violence, much of history simply paints African Americans as the victim.  This is far from the truth.  In between 1917 and 1925, black lynching was on the rise, during Ben and Slick's hay day. There were a few underground organizations of whites and blacks that actually fought back. They did so by targeting Klan member's homes and businesses, even their families, hence the reason the practice dwindled sharply.

Aunt Jet says she remembers her mother speaking to the boys about a 16 year old black youth that was lynched in Colorodo County (Columbus Texas) in 1923 for stealing a chicken from a nearby farm. The farmer was soon missing - never to be found. This is FACT, known by several generations in my family.  You can put the pieces together for yourself.  Did Ben and Slick kill the farmer ? That can never be answered.
As far as being vigilante killers, Probably, but not to the extent as is written about in 'The River'.
Or maybe they were - 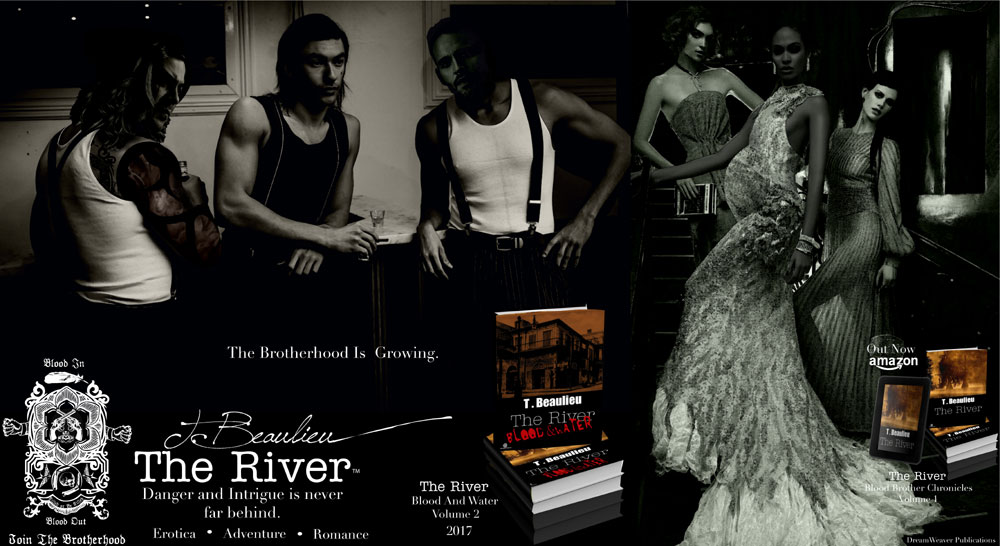 Where Ben & Slick Apart of some organization?

Yes they were. When the  men came up missing, never to be found, for months on end, Aunt Jet's farm was visited by well dressed men whom were looking for the men. These were not law officials, one being a known criminal whom had dated Aunt Jet's cousin. 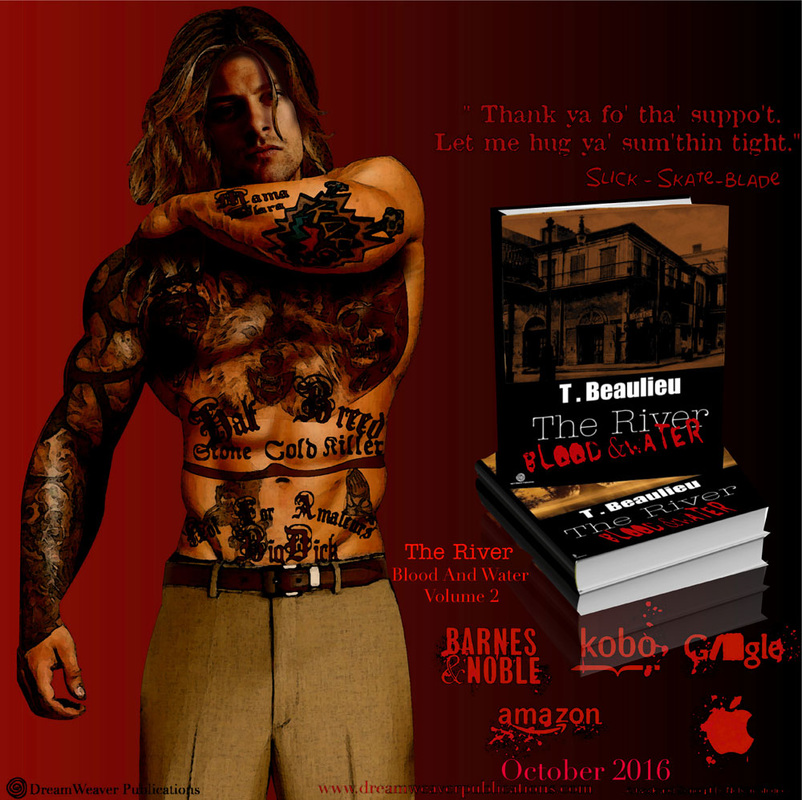 Where Slick's Tattoos just as infamous as he was ?

Yes, this is a FACT- When visiting Aunt Jet, then a young girl, her mother said the men had to cover their arms with long sleeve shirts. One time while cooking, my aunt got a glimpse of Slick's skin art as his sleeves were rolled up. Aunt Jet said this was the very first time she had seen a man and woman have sex !

Where Slick & Benjamin Half Brothers In real life ? 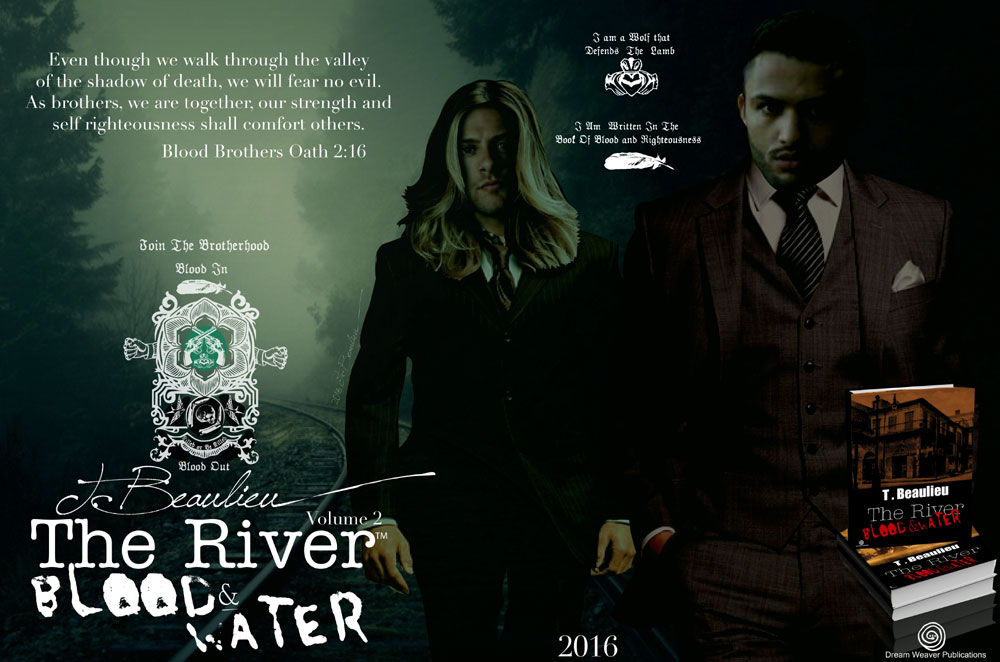 Yes, this is fact, some of which that can actually be verified in our huge family tree, even to this day. Slick ( his name was Henry  Igasho? ) was linked to a cajun clan, the Houidars, a small faction of old blood french whites that intermarried into the Louisiana part of my family. His mother was a native American woman, a Tonkawas whom was my great - great cousin on my father's side.   As in the books, Slick's father was said to be a cruel sharecropper that raped the young woman when she worked on his land. This was later found out to be untrue. Slick's father was from the Houidars, though nothing is known about the man himself, except he died in World War 1.
Benjamin's father was  the SAME  man, as his mother was one of my great-great cousins, Aunt Jet's second cousin. This was later found out when the men were growing up together, though neither had true verifications as both men were born on sharecropper land with no birth certificates. Aunt Jet's mama would often tell her that it would not be hard to see that the men are close kin, Benjamin being the oldest by two years, they both had similar facial features.

Did Slick Dye his hair ? 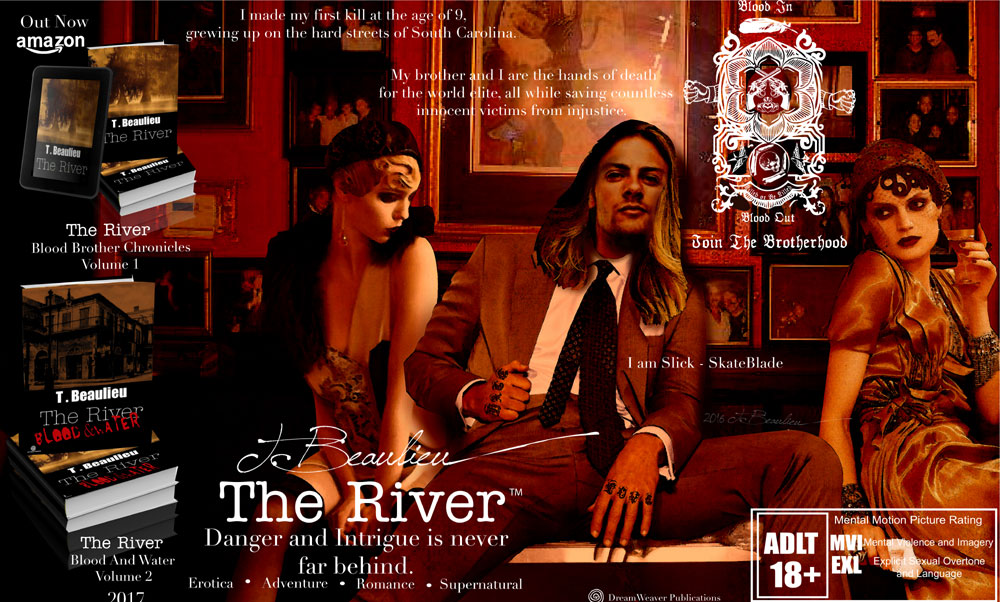 -This is one of the funnier questions passed on by readers. No - he did not. Aunt Jet suspected he used lemon juice to get the sun kissed look in his legendary mane. This is an old house hold remedy used for ages to highlight light shades of hair. She suspects this because as a young girl, when hugging the man, his long hair always smelled like fresh lemons.

This is a rather obtuse gathering of verified facts from Aunt Jet through the years. I always knew I would want to write a book about the men so I kept  my notes in a safety deposit box. The facts are sometimes strange, some are sexy. I hope they help the reader understand  the boys a little bit better .
1. Slick and Ben always slept on their backs, and BOTH were  very light sleepers.
2. Benjamin may have had OCD. He often washed his hands up to 12 times a day.
3. Slick often had what are called 'wet dreams' during his visits. This would make Aunt Jet's mama fuss to no end, often throwing the sheets away.
4. The men's accents were as thick as they are in the book. And they swore even more so, something they had to cut down on when visiting.
5. Both men had perfect feet they often kept in socks. This was a fact Aunt Jet pointed out a long time ago. I have always found it odd.
6. Both men were often silent when not talked to, even with each other. Aunt Jet said it was weird being with the men alone when her Mama was in town.
7. Both men loved to laugh. Benjamin's laugh was louder.
8. Slick often washed his hair before getting in the bath tub. This drove my Aunt Jet's mama crazy because she would have to heat up hot water on the stove. It was double the work for her.
9. The men DID have 'war scars' Benjamin had several cuts along his torso, Slick had a slightly crooked nose.
10. The brothers ALWAYS visited  with gifts, one of which was the old phonograph I used to listen to old records on.
11. Sometimes the men would visit with women. Aunt Jet hated this because this meant that the men would not stay long.
12. Benjamin was ticklish, Slick was not. This was discovered when playing with nieces and nephews.
13. The men LOVED breakfast food. They would often eat it ANYTIME during the day (Bacon,eggs and toast)
14. Benjamin loved his coffee black. Slick liked his black coffee sweet. (So do I)
15. The men wore silk boxers, a fact discovered by Aunt Jett's mother when doing the men's laundry.